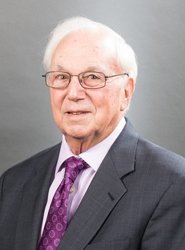 Mr. Levine graduated from CCNY-Baruch School with a degree in Accounting. Then attended St. John’s University School of Law where he was awarded his Juris Doctor degree. Upon graduation from law school, he then continued his legal education at the New York University where he received his Master of Laws in Taxation. He is an active member of the American Bar Association, and New Jersey and New York Bar Associations, and has served as chairman of the Sports Law Committee of the New Jersey Bar Association.

Mr. Levine is admitted to practice in the Supreme Court of the United States, United States Tax Court, as well as in the federal and state courts of New Jersey and New York. He has formerly practiced in the Tax Department of an international accounting firm and is a Certified Public Accountant.

Mr. Levine has been included in the list of “New Jersey Super Lawyer” in Estate Planning for over 8 years. The “Super Lawyers” are listed by category in the April issue of New Jersey Monthly Magazine.*

Mr. Levine’s law practice is focused in the areas of Estate Planning and Tax Law. Mr. Levine has gained a reputation as a dynamic and entertaining speaker in the Tax and Estate Planning areas and has spoken before numerous legal and accounting professional societies and private organizations. He has appeared on various radio shows and was featured on the Cable TV show “Your Money Matters,” shown throughout New Jersey.

In addition to his busy law practice and speaking schedule, Mr. Levine is involved with his community as a featured speaker at various civic organizations. He has been consulted and cited on cnn.com and on dowjones.com Financial News Service and on the Wall Street Journal Online on Estate Planning and related issues.

Mr. Levine is married and has two children and three grandchildren. He enjoys reading, traveling, basketball, golf and other sports as both a participant and a spectator.

There’s a lot that goes into setting up a comprehensive estate plan, but with our FREE worksheet, you’ll be one step closer to getting yourself and your family on the path to a secure and happy future.